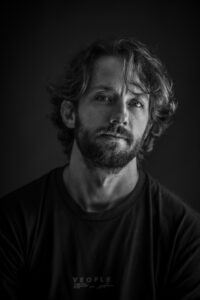 Aaron Chapman is an artist and writer based on the Gold Coast, Australia working across a range of mediums including photography, sculpture and public art. Chapman’s work is motivated by space, memory and architecture, often considering the home.
Chapman’s photography has appeared at Head On Photo Festival, Centre for Contemporary Photography and during Bleach Festival as part of Festival 2018. In 2019, Chapman was a Moran Contemporary Photographic Prize semi-finalist and a finalist in the Australian Life Photography Competition at Art & About Sydney. Chapman has spent the majority of 2020 in research and development for sculptural and public art outcomes to be evidenced at two major Australian arts festivals later in the year.
Chapman attended Griffith University where he received the School of Humanities Writing Prize in 2015. His poetry and prose has appeared in international publications and Australian literary journals. He is a current Executive Committee member of Asia Pacific Writers & Translators (APWT) and maintains a high level of engagement in, and commitment to the local visual arts and writing communities by delivering educational programs and workshops.

As we spend one third of our lives asleep, the bed most likely becomes the piece of furniture we use most. The bed is a space within the home that has a profound effect on the space inside us; a potent site of dreaming where desires and fears are heightened. ‘Turning In’, alters the bed’s objective function by suspending a mattress to convey the intimate tension we experience in this psychological space and to play on the bed’s qualities of protection, reflection, confidentiality and comfort.

When I think of home, I feel safe and where I feel safest is in my bed. The bed is where I dream about the past, the present and the future, which is both exciting and terrifying at the same time. This sculpture is about the power of dreaming.

Come and see for yourself at SWELL Sculpture Festival, Pacific Parade, Currumbin 11-20 September.

We respectfully acknowledge the traditional custodians of country throughout Australia and their continuing connection to land, sea and community.
We pay sincere respect to the Elders both past and present and emerging

If you would like to support & partner with SWELL Sculpture Festival email us at enquiry@swellsculpture.com.au.